From the moment that Jim Murphy purchased Murphy’s Bleachers, formerly known as Ray’s Bleachers, in 1980, it became the center point for so much activity in the neighborhood – including serving as the relaxation point of choice for dozens of Chicago Cubs down through the years (Mark Grace, Rick Sutcliffe, Keith Moreland, Jody Davis, and Randy Myers to name just a few), too many journalists, police and firemen to count, a “who’s who” of local politicians, the home to many political and community public events, hundreds of charity and political fundraisers, private good-byes (the family of NBC-5’s Darrian Chapman held Darrian’s memorial service at Murphy’s), the setting for hundreds of community meetings dating back to the battle over night games at Wrigley Field in the 1980s, the occasional wedding proposal, and just every-day rollicking good fun. Jim slowly expanded and re invested in Murphy’s, creating what is now widely recognized as the best sports bar in America.

The Main bar of Murphy’s has been at the corner of Sheffield & Waveland since 1930s. It started out as Ernie’s Bleachers, selling hot dogs and beer by the pail, right after prohibition (probably during as well). The original hot dog stand was stolen from Peterson & Elston and set up on the corner of Waveland & Sheffield.

During WWII, Ernie and a group of building inspectors built a real tavern, a cigar- box-shaped neighborhood bar that is the orginial building of Murphy’s Bleachers. He sold it at the end of the war and it became JB’s Bleachers for a couple of years until JB got sick and sold it back to Ernie.

[Ernie Pareti wanted the only hot dog stand in the city. Anyway, that was his story, told when he was in his nineties]

In 1965 it became Ray’s Bleachers when Ernie sold to Ray Meyers (hope you’re catching on to how the name changes work.) It soon achieved renown status as home of the Bleacher Bums, who surfaced during the Cub’s race for the pennant in 1969.

Ray sold to Jim Murphy in 1980 and the bar has grown in size and reputation ever since.

Former CPD Officer Jim Murphy purchased the location from Ray in 1980. The building and subsequent additions have been owned by the Murphy family ever since. Jim Murphy passed away in 2003 and the location is now owned and managed by Beth Murphy. 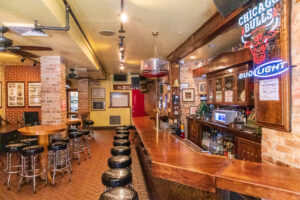 (currently, the sign hangs on the north side of the building, facing Waveland) 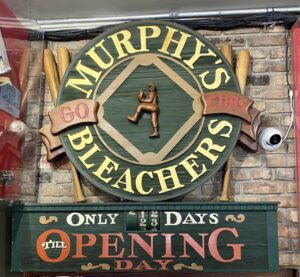 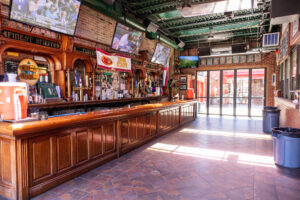 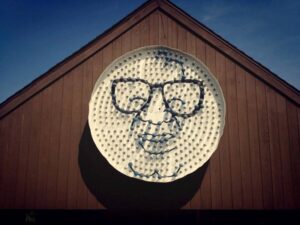 A museum was opened to the public on Opening Day 1999 featuring a miniature replica of Wrigley Field painstakingly created by local artist Steve Wolf. 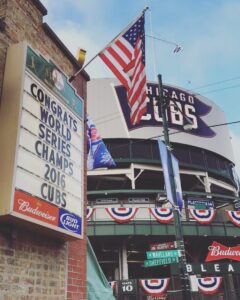 Murphy’s Bleachers has been a neighborhood staple since we opened our doors in 1980. We have been fortunate to befriend many past & present Cubs players, artist, musicians, celebrities & athletes…And BILL MURRAY